Initially, the RMC was controlled directly from ENet. When more and more functionalities were being added, we decided to separate it into an independent application in 2008.

To minimise the imbalance, the received installation energy programs are converted into operating schemes per installation, which take into account the specific installation properties. These control schemes are sent to the RMC.

An imbalance price prediction is made on the basis of the delta signal and the bid price ladder published by Tennet. 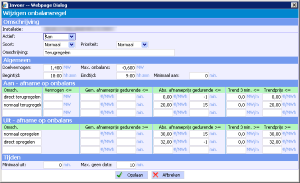 By helping Tennet balance the electricity grid by deliberately creating imbalance in the other direction, money can be made. In ENetControl, customers can set rules when they want to deviate from the energy program and thus create deliberate imbalance. ENetControl subsequently makes changes to the control scheme. The changes are made in such a way that if the internet connection is lost, the RMC reverts to the original schedule.

ENetControl maintains continuous connection with all RMCs in the field for the exchange of data such as control schemes, measurement data, Linux syslog and time synchronisation. For this, it uses its own protocol that deals with UDP.

Developed it myself in its entirety. From functional design to software development.