The RMC is a decentralised control unit that ensures that the installations are switched on and off at the correct time. It also checks the correctness of the supply in real time by reading the energy meters. Installations are for instance a CHP or lighting of a greenhouse.

The first version of the RMC was developed in 2006. The RMC consists of a controller (Single Board Computer) with a simple Linux operating system and ICPDAS I/O modules. We had to assemble everything ourselves in a standard rittal box.

RMC V1 had to be custom made. This required several visits for an installation. The installations also ran long regularly, so we had to reserve extra time around the installation days.

In 2010, we started developing a new version that was to become a kind of box of blocks. The goal: inventories should no longer be necessary and the installations had to run faster. We developed our own controller and IO module for RMC V2. In practice, we could now do one to two installations per day.

Pulse contacts or Modbus counters are used to measure energy. The standard measurement time is one minute. The measured data is stored locally and sent to EnetControl for further processing.

The RMC consists of a controller that is connected to the internet and has one or two RS485 buses for communicating with the I/O modules . I/O modules can be ICPDAS-I7000 or standard MODBUS-RS458. We chose RS485 because it only requires two wires, which can be used over distances of up to a kilometre, without special cables.

The software in the controller is written in C++. The application consists of several programs that communicate with each other via shared memory.

We developed our own digital I/O module for the RMC-V2. The heart of this module is the ATMEGA16A. That is an 8-bit RISC microcontroller with 16 KB of programmable flash memory and 1 KB of SRAM that is programmed in C. Communication with the controller is through the Modbus-RS485 protocol. It was necessary to program everything ourselves: interrupt handlers, read out input signal, debouncing inputs, counting pulses, logic and modbus protocol. Everything had to fit into 16 KB. The final image was slightly larger than 6K. 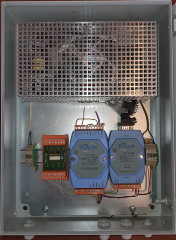 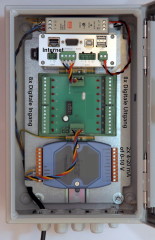 For the RMC version 2, we developed our own hardware using, among others, Autocad Eagle 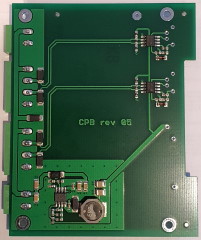 A board for digital input and output, with eight digital inputs and eight digital outputs. In addition to the actual values of an input, each input has a 32-bit pulse counter. In order not to have false input pulses, de-bounced is done throuigh the software. In addition to a digital output that can be set via the modbus, you can also link it to an input. This way, the input is passed on as a pulse to the output. This is often used to transmit energy pulses to another system.